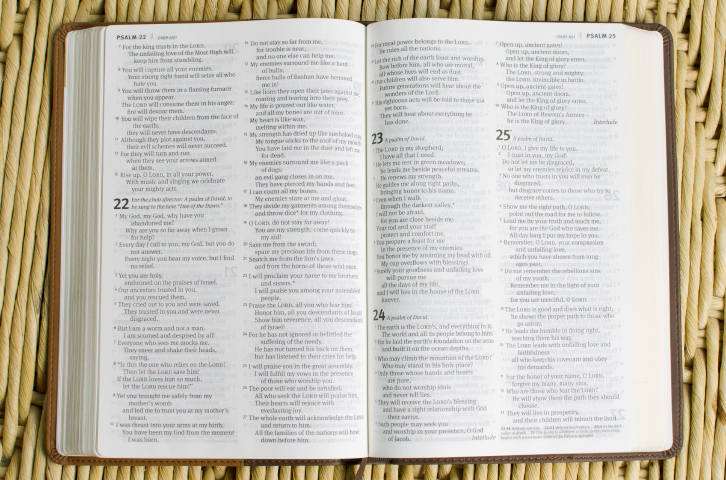 Psalm 21 is about the relationship between God and a godly king.  Vs. 1-7 are addressed to God.  They praise Him for the way He blesses and establishes the king.  By contrast, vs. 8-12 are addressed to the king.  They predict that the king will find success in fighting and defeating his enemies because of God’s help.  The psalm includes with more praise directed toward God in v. 13.  Though the psalm is not quoted nor alluded to in the New Testament, all these sentiments certainly apply to our King today, Jesus.

Psalm 22 is arguably the most prominent prophetic psalm in the entire book.  Even though it is David’s lamentation over his own sufferings, its words prefigure the suffering of Christ.  The first half of the psalm (vs. 1-21) is made up of alternating sections of complaint and praise.  David complains about his predicament and God’s apparent failure to help him, but he always returns to his faith that God will come to his aid.  In this section are some of the most specific prophecies in existence about the crucifixion:  that Jesus’ enemies would mock Him (vs. 6-7), pierce His hands and His feet (v. 16), and cast lots for His clothing (v. 18).

By contrast, the tone of the second half of the psalm is much more optimistic.  David explores the good results that will come when God saves him, including a worldwide turning to God (v. 27).  These things were fulfilled as a result of Jesus’ resurrection.

Psalm 23 is the most well-known psalm.  It is widely memorized, and our hymn “The Lord’s My Shepherd” is a paraphrase of it.  It compares God to a shepherd and David (and all the rest of us!) to a sheep.  Like a good shepherd, God provides for us (vs. 1-3) and protects us from our enemies (vs. 4-5).  V. 6 sets out the result:  we will enjoy lifelong blessing and dwell with God forever.

Psalm 24 was probably used in religious processions.  It has three main parts.  The first (vs. 1-2) asserts God’s ownership of the world because He created it.  The second asks who can ascend the hill of the Lord (probably the literal Mt. Zion) and enter His holy place.  Such people have good behavior and honest hearts, and they can expect God to bless them.  The final portion of the psalm is addressed to the gates of Jerusalem, urging them to open before God, who is the King of glory.

Psalm 25 is another appeal for God’s help in time of trouble.  Vs. 1, 2, and 7 are quoted in our praise song “Unto Thee, O Lord”.  In this particular case, David asks for God’s protection from his enemies even though he is conscious of his own imperfections.  He relies on God’s response to his faith, even though he knows he has sinned (v. 7) and needs further instruction (vs. 4-5).  According to vs. 8-10, his hope is founded in God’s steadfast love.  Vs. 11-15 describe the benefits that come to those who fear God:  forgiveness, instruction, stability, friendship, and protection.  The psalm concludes with a final plea for God’s presence and redemption.